In 2016, FMA (Forces Motrices de l’Avançon) contracted us to replace most of the Vignasse discharge conduit, which is nearly 120 years old. This 900 mm di-ameter conduit with a maximum free surface flow rate of 6 m3/s is an essential element for the operation of the plant.

The major challenge faced by HYDRO Exploitation in this project was:

On the proposal of HYDRO Exploitation, FMA decided to replace the original conduit with a 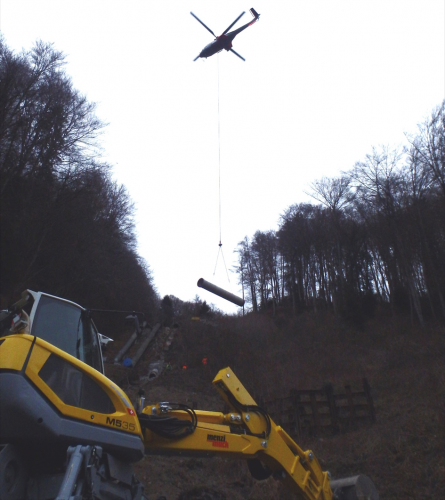 new interlocking conduit of the same diameter made of ductile cast iron. Great care was taken in replacing the conduit aerators, which are an essential requirement for high velocity free surface flows. The open-air part, measuring 131 m, was mounted on the existing concrete saddles, which were thus reused. The buried part, measuring 74 m, was also laid on the original saddles.

The presence of a local steering committee, led by FMA, ensured that the works, performed by the civil engineering contractor Dénériaz and supervised by HYDRO Exploitation, were carried out in optimal conditions, from January 2019 to March 2019.

The Sublin hydroelectric plant, owned by FMA, has been using since 1898 the waters of the Avançon, upstream of the city of Bex, between the localities of Peuffeyre and Sublin. In 2015, FMA entrusted us with the operation and maintenance of their hydroelectric plants.

Thanks to their new equipment, which cannot be found anywhere else in French-speaking Switzerland, the Central Workshops are taking on new challenges, from machining a giant chandelier to making a special tank for cocoa!