EDF: rehabilitation of the Francis groups

As part of the programme to maintain and optimise its hydropower plants, Électricité de France (EDF) entrusted us in 2017 with the rehabilitation of the Francis groups at the St Pierre en Faucigny and Le Carrelet power plants.

Since late 2016, extensive works have been in progress at the St Pierre en Faucigny plant, including replacement of the penstock pipe, the header valve, the safety valves and the control command. The twin double turbine Francis group was dismantled by us. The rotor was entrusted to another EDF subcontractor to remake the electrical section and the turbines were brought back to our central workshops in Martigny for their complete overhaul. 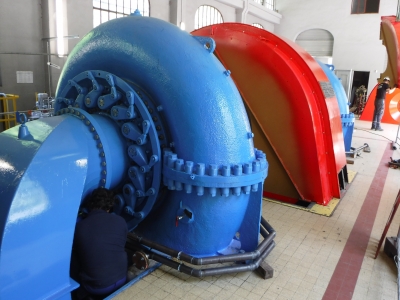 After dismantling the components on site and performing an expert appraisal in the workshop, a review was conducted with our client EDF to define the scope of the works. Once these had been completed, on-site reassembly and inspection measurements were performed by our specialists. The group restarted its operation in spring 2018. 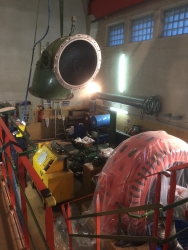 includes the Franco-Italian dam on Mont Cenis. Water runs through the installed group turbines upstream of the Plan d’Aval reservoir.

This group came from the Fonderie power plant that was decommissioned in the nineteen-eighties following the construction of Grand’Maison.

As for the St Pierre en Faucigny power plant, HYDRO Exploitation was responsible for repair and complete reassembly of the group, while the electrical section was handled by an EDF subcontractor and the turbine section transported to the Central Workshops in Martigny for overhaul.

The special feature of this operation involved the placing of a new casing supplied by EDF.

Upon commissioning, vibrations were reported on the end thrust bearing which was not part of the overhaul scope. Further investigations showed that the original clearances and wear and tear no longer allowed the bearing to handle the new operating conditions. In cooperation with the EDF GMH Alps technical service, we quickly put in place a system to tighten and wedge the components in the stack, considerably reducing the vibrations of the bearing. This solution resulting from our experience as an operator and the good collaboration with EDF enabled us to return the group to production before the first snow in November 2018 to the greatest satisfaction of our customer.

Why did you entrust this work to HYDRO Exploitation?

HYDRO Exploitation is one of the panel of companies approved by EDF GMH Alps for this particular type of activity. This company integrates maintenance, repair and operation. Those specialisations are of interest to EDF. The partnership developed over many years and mutual trust are bearing fruit. The results are there now.

How would you define our company?

Available, professional and competent. For on-site interventions and workshop services.

Would you recommend HYDRO Exploitation?

Our Wheel Refurbishing Workshop (RR) is dedicated to the repair of pump and turbine wheels abraded by water-borne sediments. The development of new technologies now allows us to optimise repair works on wheels while also considerably improving their final quality.